It is well known that Relative clauses (RC) are comprehended as attaching to different constituents cross-linguistically, (see ex.1) (Fodor, 1998). The embedded clause [that was drinking coffee] may refer to either [NP the mother] or [NP the woman], hence both are possible answers to the comprehension question in (2). If the meaning is as in (2a), the RC modifies the higher noun in the syntactic tree, which is known as high attachment (HA). If (2b) is the meaning, the RC modifies the lower noun in the syntactic tree, which is a case of low attachment (LA). Native speakers (NS) of English prefer LA; NSs of Russian prefer HA (Fodor, 1998).

It has recently been argued by Grillo & Costa (2014) that within each language, RC resolution can also depend on the matrix verb. A perception verb as in (3) enables a third, event-oriented interpretation, known as the Pseudo-Relative (PR) reading. Compared to the restrictive RC in (1), the perception verb see triggers a change of structure in English; the same happens in Russian. The Small Clause (SC) [the mother of the woman drinking coffee] modifies the matrix verb. In languages like French, Italian and Spanish, both the PR-reading and the restrictive RC interpretation can be inferred from the same surface string.

Grillo & Costa (2014) argue that the availability of verb modification in the PR-reading facilitates HA in all languages; this mental projection is easier for the parser than the restrictive RC reading. This claim finds experimental evidence in Grillo et al. (2015), which investigates Spanish and English monolingual processing. In this presentation, we discuss results from bilinguals and trilinguals. The bilingual groups are Russian–English and English–Russian. We predict that if L2 processing develops to the L2 target, there will be a switch in RC attachment preference in both bilingual groups. If L2 processing is sensitive to a linguistic cue (a perception verb), this would only be visible in the English-native group, since Russian is a HA language anyway.

Bilinguals are compared with two groups of trilingual participants that share the same L1 and L3 but differ in their L2s. Experimental Group 1 is L1 Russian/L2 German/L3 English, while experimental Group 2 is L1 Russian/L2 French/L3 English. The L1 and the L2s of the trilingual subjects, French and German, belong to the HA language group. Thus, we investigate RC attachment resolution in L3 English, a LA-language, when the previously learnt languages facilitate HA. Furthermore, the two L2s offer another distinction. In PR-formation, German patterns with Russian and English and requires an overt change of structure for an event-oriented interpretation, as in (3). French allows the PR reading with just a covert change of structure as in (4). In this respect, the study predicts different L2 influences on processing the sentences with the perception verb in the matrix clause. Group 2 has the PR reading as a default interpretation option from their L2, French. Group 2 should show a stronger verb effect on RC attachment in English and be faster in making interpretation decisions than Group 1.

In a self-paced reading experiment (Linger), the respondents read a set of sentences and answered a comprehension question after each sentence. The stimuli manipulated perception and non-perception matrix verbs as well as a pragmatically-based gender bias

(1) Bill arrested [the mother of [the woman (that was) drinking coffee]]. LA and HA acceptable

(2) Who was drinking coffee? a) the mother b) the woman

Bill saw the event of drinking coffee performed by the mother of the woman.

Mary   heard    the mother of the woman who talked about cosmetics. 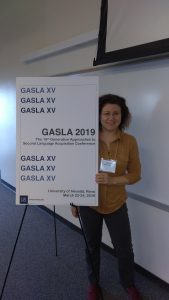