Cyclicity in Parsing and Interpretation Decision-Making in Russian and English

In a self-paced reading experiment (Linger) with monolingual speakers, the Russian-like binding pattern for (1) is “herself = mother, her = woman”, while it is the opposite in English, p ˂ .001. An overall switch to the Russian-like pattern is caused by the effect of the matrix perception verb, p ˂ .05. The perception verb forces the appearance of an eventive complement that modifies the matrix verb, as in (2)

(2) Bill saw [SC the mother of the woman’s talking about herself / her in the yard].

The eventive interpretation competes with the RC-readings and causes a processing conflict. Its resolution increases the reading time at the critical regions, p ˂ .001. At the level of interpretation, binding principle A is found to be easier to process. Sentences with reflexives are read faster at the spill-over region and binding decision for reflexives are made faster than for pronouns, p ˂ .001. Different interpretation patterns in English and Russian result from the application of similar parsing mechanisms. We discuss these findings in the spirit of Grillo and Costa’s (2014), Grillo et al’s (2015) analysis. 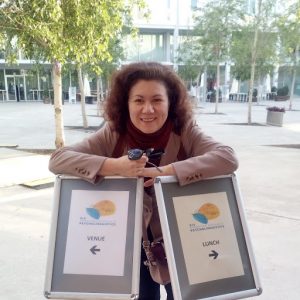